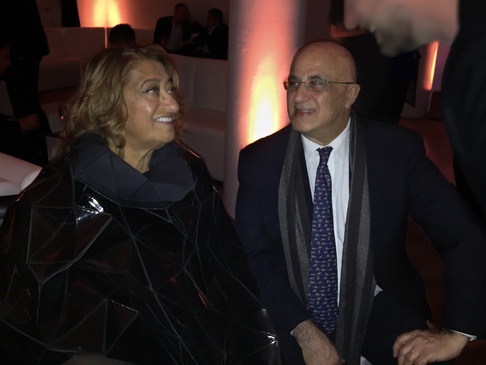 Ted Jacob attended the celebrations after Dame Zaha Hadid was awarded the 2016 Royal Gold Medal Award. She is the first woman to win the prestigious decoration on her own accord.

Established in 1848, the medal, which is approved by the reigning monarch, recognizes the lifetime achievement of a distinguished person who has promoted the advancement of architecture. “I am very proud to be awarded the Royal Gold Medal, in particular, to be the first woman to receive the honour in her own right,” Hadid said in a statement. “We now see more established female architects all the time. That doesn’t mean it’s easy. Sometimes the challenges are immense. There has been tremendous change over recent years and we will continue this progress.”

Zaha and Ted, both of Iraqi origin, had the opportunity to share their ideas on projects and the future of construction in the Middle East.